Occasional forgetfulness is a natural part of the aging process. For instance, misplacing keys or having trouble remembering someone’s name from time to time is not necessarily a cause for concern, especially if you or your loved one are able to recall those things later. However, if memory lapses are frequent and they interfere with daily life, this could be a sign of Alzheimer’s disease or another form of dementia.

What is Alzheimer’s Disease?

Alzheimer’s Disease is the most common type of dementia. It is an irreversible brain disorder that affects memory, language, reasoning, judgement and behavior. It is also progressive, usually developing slowly and getting worse over time. It might start with trouble remembering events or conversations that just happened, followed by confusion about time or place, and eventually progressing to the point where the individual can no longer perform daily tasks or hold a conversation.

While there is no cure for the disease, there are treatments that can temporarily slow the worsening of symptoms and improve the quality of life for those with Alzheimer’s. As the disease progresses, a memory care community may eventually become a necessity.

What are the Symptoms of Alzheimer’s Disease?

There are 10 warning signs associated with Alzheimer’s disease. If you notice any of these symptoms, it’s important that you schedule an appointment with your doctor to discuss treatment options. 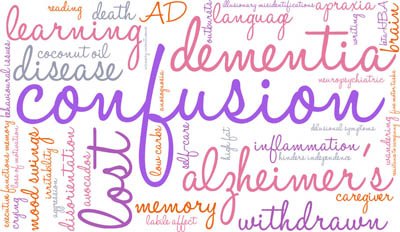 1. Memory Loss that Interferes with Daily Life
Difficulty recalling recent events or conversations that just happened, forgetting important dates, or repeatedly asking for the same information, are all examples of memory loss associated with Alzheimer’s. Individuals may also need to rely more on memory aids, such as reminder notes.

2. Difficulty Concentrating or Problem-Solving
With the onset of Alzheimer’s, it can be increasingly challenging to concentrate. Simply following a recipe, or balancing a checkbook and paying bills, can become an arduous and frustrating task.

3. Trouble Completing Familiar Tasks
Often those with Alzheimer’s will forget how to drive to a location they have been to many times before. They may also struggle to do something they have done repeatedly in the past, such as a household chore or job responsibility.

4. Confusion about Time or Place
People with Alzheimer’s can become disoriented. They may forget where they are or how they got there. They may also become confused about the time of day or even year, sometimes dressing inappropriately for the season.

5. Impaired Visual Perception or Focus
Some vision problems can be associated with the onset of Alzheimer’s. Symptoms such as difficulty reading, an inability to judge spatial relationships or distance, and issues determining colors or contrast should be discussed with a doctor.

6. Problems Speaking or Writing
Most of us struggle to find the right word on occasion, but it’s more severe with Alzheimer’s. Those with the disease may stop in the middle of a conversation unable to re-start, repeat themselves, or use the wrong word to describe an everyday item.

7. Frequently Misplacing Items
It’s normal to lose things on occasion, but with Alzheimer’s, the individual is unable to retrace their steps to find the missing item, and the occurrences are more frequent. They may also put things in unusual locations, such as keys in the freezer, and sometimes accuse others of stealing or moving items.

8. Decreased Decision-Making Abilities
Alzheimer’s can impair judgement and cause bad decision-making. Someone with Alzheimer’s may be more likely to fall victim to phone or Internet scams. They may also fail to take medications or maintain healthy eating habits and hygiene.

9. Disinterest in Work or Social Activities
Alzheimer’s can cause people to withdraw from things they previously enjoyed. They may have less energy and drive to do things, or spend more time watching TV and sleeping. They may scale back with projects at work, or avoid social interaction.

10. Mood Swings or Angry Outbursts
People with Alzheimer’s may experience mood swings or personality changes. They may be easily agitated, causing them to lash out at family, friends and colleagues, or they may become depressed, anxious or fearful. In the later stages of Alzheimer’s, individuals may also develop delusions or paranoia.

When to Seek Help for Memory Loss

If your search for a memory care community includes the Albany NY area, we invite you to take a tour of the Eddy Memory Care Community at Marjorie Doyle Rockwell Center in Cohoes and the Eddy Memory Care Community at Eddy Hawthorne Ridge in East Greenbush. Eddy Senior Living is committed to improving the quality of life for individuals living with Alzheimer’s disease through innovative memory care in a warm, homelike environment, where dignity and independence come first. Contact us or call (877) 748-3339 to speak directly with a senior living specialist and schedule a tour.