Whether it’s the soft purr of a cat or the wet kisses from an over-exuberant dog, there’s nothing like the companionship of a pet to restore calm and put a smile on your face. Studies have shown that just fifteen minutes spent bonding with a pet results in significant hormonal changes in the brain. For instance, serotonin, prolactin, and oxytocin all increase producing a “feel-good” response and lowering stress. In addition, pet companions have been known to lower cholesterol levels and fight depression in their human counterparts, and it’s believed that they may even aid in the prevention of heart attacks and stroke.

It’s no wonder then that animals are increasingly being used for therapeutic purposes in memory care and assisted living communities, including the Eddy Senior Living Communities in Cohoes, Troy, Niskayuna, and throughout the Albany NY Capital Region. Known as pet therapy, or animal-assisted therapy, the treatment is just as popular with seniors and pets, as it is with medical professionals. 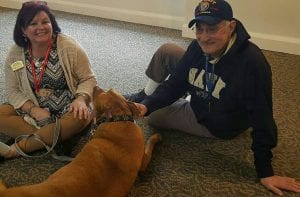 Jack K. is a resident at the Marjorie Doyle Rockwell Center for Memory Care in Cohoes NY, and he has been an animal lover his whole life. “Dogs just love you no matter what,” he says when asked about his relationship with Cooper and Bubbie, two of the therapy dogs at the Center. And it’s true. The dogs don’t ask much of the residents, aside from love, which they get in spades!

Jack takes the dogs for walks and out to play, and brings them to be groomed. For him, and many of the memory care residents who have had pets their whole lives, the dogs provide a sense of normalcy and comfort, which they benefit from immensely. 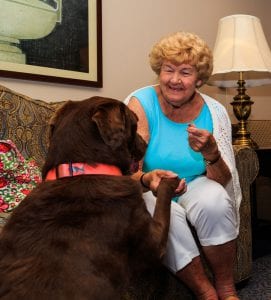 Every other Friday, The Terrace at Eddy Memorial, an assisted living community in Troy NY, receives a visit from a very special guest. In fact, Stella the Chocolate Labrador is considered a bit of a senior herself.

Accompanied by her owner, Steve Ryan from The Terrace maintenance department, Stella is always happy to follow through on commands, such as sit, paw, and rollover.

“Life is simply better with a pet,” says Nancy H., a resident and gift shop volunteer who moved into The Terrace after her husband passed away four years ago. “I’m a Labrador and Beagle fan,” she adds. “And I’ve had many dogs and several cats in my life.”

One of Nancy’s dogs was named Yash, which is Polish for John, and she had others named Porkie, Petunia, and Dusty. “I’m so grateful that Steve brings Stella to The Terrace,” Nancy says of the bi-weekly visits. 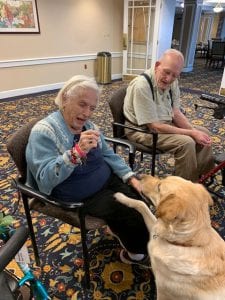 Emma is part Yellow Labrador, part Golden Retriever, and all love. A regular visitor at The Terrace at Glen Eddy, an assisted living community in Niskayuna NY, her story actually began back in 2015 in Charlotte, NC. Lorraine, whose Mom was a resident at The Terrace, took an Amtrak train from Albany to Charlotte to adopt Emma, and then flew the 8-week old puppy back home.

“She was terrific on the flight. No noise, no barking, no problem at all, so we knew we had a winner of a pup,” recalls Lorraine. “She gets along great with people. She loves everyone and other dogs, and loves meeting new buddies.”

“It would’ve made my mom very happy,” she adds.

Pet Therapy for Seniors in the Albany NY Capital Region

Being around animals simply makes seniors feel better, healthier and happier. To learn more about our pet friendly Senior Living Communities in Slingerlands, Troy, Niskayuna, East Greenbush, and Queensbury, call (877) 748-3339 or contact us.