If you’re contemplating a move to the Glen Eddy, and you’re wondering what daily life is really like, read on to hear from residents who have made our Niskayuna senior living community their home.

An Active Community with So Much to Do

From going on trips to swimming in the pool to learning new skills, there’s truly something for everyone at Glen Eddy. 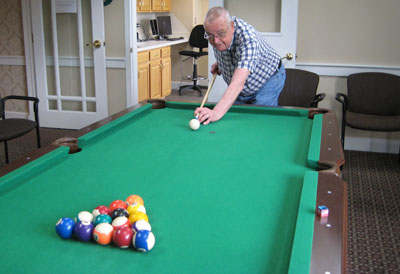 For John H., a Glen Eddy resident since 2017, his favorite activities are the overnight trips. “Since moving in, I’ve been to the Sagamore Hotel on Lake George and Bennington VT,” says John.

He also enjoys the performances in the Edison Room and playing pool with the other residents. “I love playing poker, too,” adds John. “I’m working on getting a group together.”

In addition, Glen Eddy appeals to John’s volunteer spirit. He’s part of the Speakers Forum Committee and every year he has volunteered to ride in the Glen Eddy car and give out candy in the Niska-Day Parade.

As a Long Island native, John appreciates the “all-inclusive” aspect of our Niskayuna senior living community. “I selected Glen Eddy because one of my daughters lives in the area,” explains John. “But also because the cost of living is lower here than it is on Long Island.”

A Senior Apartment with Fringe Benefits

While our residents appreciate Glen Eddy’s maintenance free living, it’s the many services and amenities that really set our Niskayuna senior living community apart from the rest. 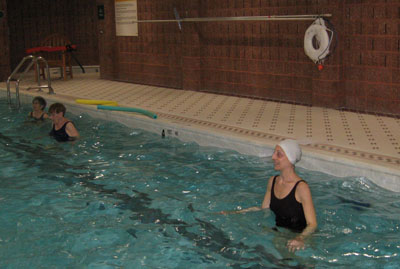 While Vicky has always lived in apartments, nothing quite compares to the quality of life she experiences here at Glen Eddy. “I love all the amenities,” says Vicky. “The swimming pool, the food and, during the winter, knowing that the snow will be cleared.”

Vicky is also one of the younger residents at Glen Eddy, and finds it interesting to see how people manage as they age; how they cope. “Being younger, I have the advantage of being able to ask questions of other residents as certain health issues come up,” explains Vicky.

A Glen Eddy Resident since 2013, Vicky remembers visiting the Eddy as a child. “My Grandmother sat on the Eddy board,” recalls Vicky. “She would visit the different communities with her church group, delivering food and knitted blankets, and I would go with her.”

Although Vicky drives, she enjoys being dropped off at Proctor’s Theater and the Saratoga Performing Arts Center for various shows and performances. And when she’s not walking the park-like campus or swimming in the indoor pool, she regularly attends EmpowerU exercise classes.

Moving into a senior living community, like Glen Eddy, doesn’t mean giving up your active lifestyle or your privacy and independence. In fact, for many residents, it’s just the opposite.

When Laura V. and her husband moved from their large home in Niskayuna to Glen Eddy, they were worried it would be hard to adjust to senior apartment living. “We feared feeling cooped in,” explains Laura. “But we were wrong. Our senior apartment has plenty of space and the common areas on the property provide lovely gathering spots for planned or impromptu social interactions.”

“Really, it is the best of all worlds: companionship yet privacy, plus a beautifully maintained and secure property without the maintenance hassles of a private home.”

Perhaps the most unexpected benefit for Laura has been the new friendships she’s found at Glen Eddy. “When my husband died, the support and compassion I received during his illness and after his death from the staff and residents is something I will never forget,” explains Laura. “The experience reinforced to me that the Glen Eddy is a supportive community where residents care about each other in a respectful manner”.

Take a Tour of Our Niskayuna Senior Living Community

See for yourself all that Glen Eddy has to offer. Call 518-280-8385 or request a tour of our senior living community in Niskayuna NY.